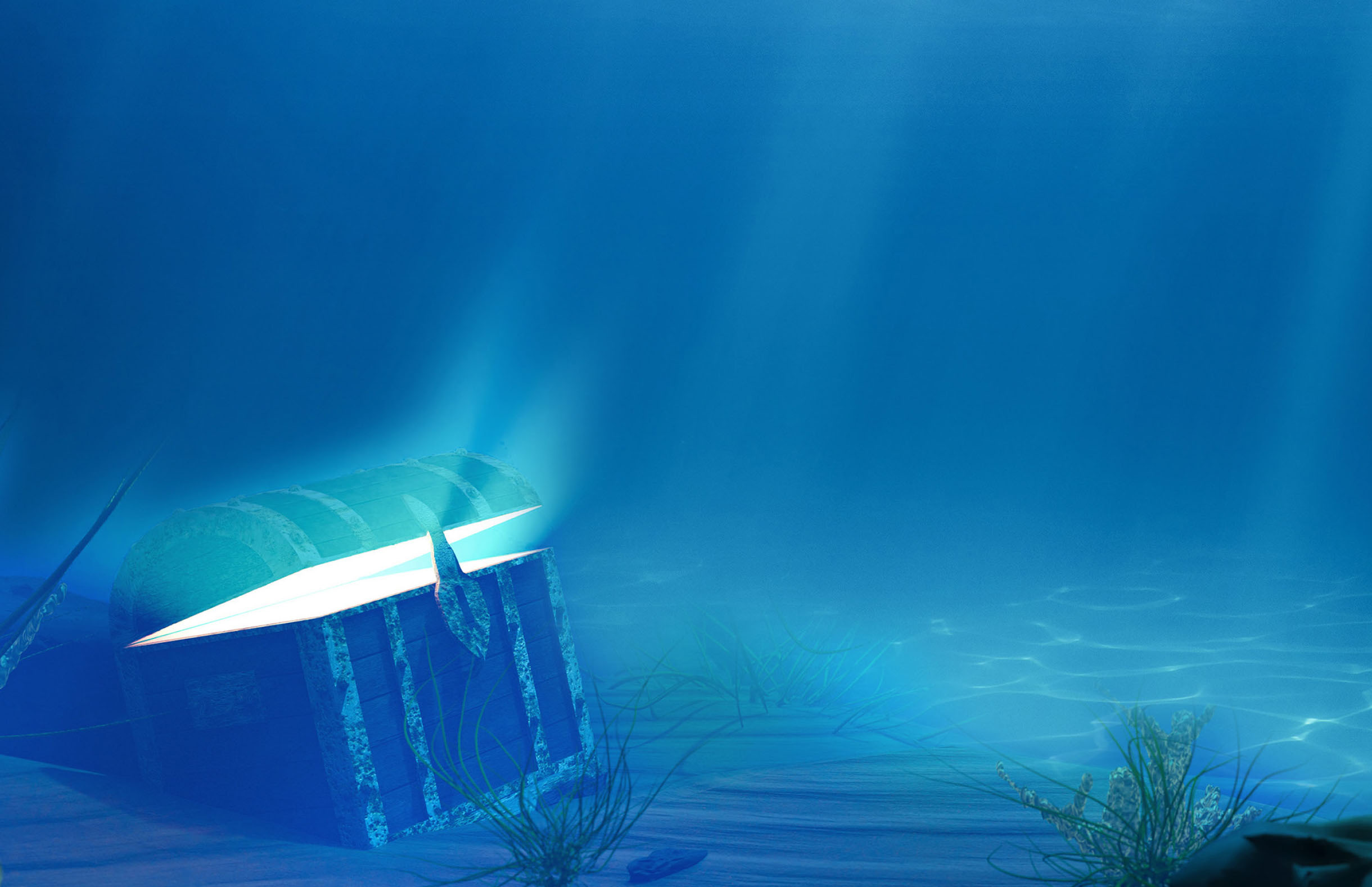 Dave Sexton is the Officer for the Royal Society for the Protection of Birds (RSPB) on the Isle of Mull.

Here he describes his passion for white-tailed sea eagles…

It always brings a lump to my throat. The thought of the last known white-tailed eagle in the UK in 1918 sitting atop a wild, wind-swept cliff in Shetland searching in vain for its mate. Indeed, looking for any other of its kind. What must it be like for the last one of a species?

They must feed and preen as normal of course, but for many hours a day, sometimes for years on end, they sit all alone and watch… and hope.

From what had been the commonest, most widespread eagle in the UK, nesting the length and breadth of the kingdom from the Isle of Wight to the far Northern Isles, its population was reduced to a tiny remnant

This last sea eagle had been widowed eight years previously in 1910, but returned faithfully every year after to the eyrie where they had raised their chicks together, to “gaze out over the wide horizon and wait.” Sadly, no new mate would appear over that horizon. All over Scotland sea eagles were being ruthlessly persecuted – shot, poisoned, collected and their eggs stolen. From what had been the commonest, most widespread eagle in the UK, nesting the length and breadth of the kingdom from the Isle of Wight to the far Northern Isles, its population was reduced to a tiny remnant.

A few years previously in 1916, the last recorded breeding attempt had already occurred on Skye. Doubtless a few immature birds – and even some unpaired adults – still drifted, lost and aimless along the remotest sea cliffs, but for all intents and purposes, sea eagles were already extinct as a breeding species. What a desperately sad and shameful period in our history

Folklore has it that this last UK sea eagle was a female and an albino. There’s a poignant black-and-white photograph taken sometime between 1912 and 1918 by Harry Brewster Macpherson who travelled from Shetland from Strathspey to record this remarkable bird for posterity.

It remains the only known photograph of a British sea eagle ever taken. Harry might not have realised then that the bird sheltering on the cliff below him was probably the last of its kind.

20-25 years, sometimes older. The oldest pair on Mull disappeared in 2016 aged 37 (estimated). They pair for life, but will re-pair if one partner is lost. They mature at five years old when they develop the yellow beak, pale head and white tail of an adult.

There’s an equally moving account by the wildlife artist, naturalist, falconer and taxidermist George Edward Lodge who also went on an expedition in 1914 to paint this bird. In his diary from June of that year he noted: “North Roe. Went to where the sea eagle lives. We saw her from a long way off, like a white spot on the cliff below the old nest, which is still there on a 500-foot cliff. She was very wild and flew off and away and we did not see her again. She is quite white and looks as white as a gull while flying.”

In truth, the bird probably wasn’t an albino. As Lodge states, he noticed the primary feathers on the wings were “light brown.” This sad, lonely female was almost certainly a sad, lonely male. Sea eagle males are noticeably smaller than females.

And just one final bit of myth busting! This widowed, single male probably wasn’t the absolute last of his kind! Reliable reports persisted into the 1920s and even occasional later ones, sometimes of a pair but normally of lone birds roaming the Highlands and Islands. However, for now, our almost white single bird in Shetland is the last proven, documented individual sea eagle in the UK.

But fast-forward 40 years and both amateur and professional conservationists were already trying to realise the dream of bringing this native bird back. RSPB Scotland Director George Waterston also had a long held ambition to bring sea eagles home. Indeed, with his cousin Pat Sandeman, they made the first attempt to do just that by releasing three Norwegian sea eagles at Glen Etive in Argyll in 1959.

While one of the three survived for at least a year before being caught in a fox trap, another ended up in captivity and the fate of the third remains unknown. In 1968, a further four immature sea eagles from Norway were released on Fair Isle. While both releases involved too few birds to be ultimately successful, important lessons were learned for the next “official” reintroduction attempt on the Isle of Rum starting in 1975.

This was to become the first of three phases of releasing birds gifted by Norway to the west and east coasts of Scotland, concluding in 2012.

It was the first tantalising reports of sea eagles wandering away from Rum, and on to the nearby Isle of mull, which first gripped my fascination (my family might say obsession!). I was on a birding trip to Mull with my friend Eric Kidd in May 1980. We’d already seen our first ever otter in the wild and had watched golden eagles displaying. Then, on a late-afternoon drive along the shore road by Loch Spelve, we screeched to a halt as we’d both simultaneously glimpsed the massive, broad, plank-like wings of an adult sea eagle flapping hard across the loch, being pursued by a mob of angry hooded crows.

As they all vanished behind a ridge, we looked at each other in disbelief; we’d just witnessed conservation history. Sea eagles really were back home at last. Soon after, I began to pester long-suffering Richard Porter and Mike Everett in the Species Protection Department at RSPB HQ begging for a job to protect the first known nesting attempts.

My persistence eventually paid off and I was given a contract in 1984 to watch over an active nest on Mull with my colleague Mike Madders and boss Roger Broad. History was not to be made that year, however, as the single infertile egg failed to hatch. Undeterred, we were both back the following year and joined by Keith Morton to watch over the same pair, which were trying again.

Large, stick-built nest lined with grasses, on trees, crags, cliffs or occasionally on the ground. Nests are tended year-round in the run-up to egg-laying in March. Incubation of one or two (rarely three) eggs lasts 38 days and both male and female do their share.

Chicks hatch a day or two apart and are more tolerant of each other in the nest compared to golden eagles. Chicks are fully grown at 10 weeks but often don’t fledge until 12 weeks. They may remain with their parents through the autumn and sometimes the winter. 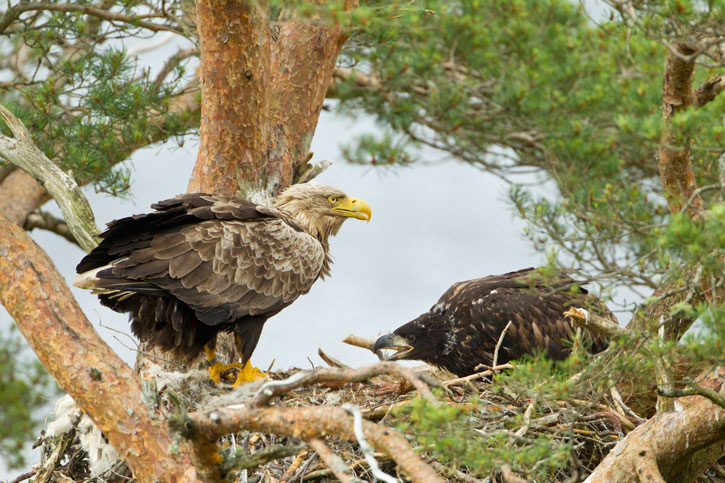 Finally, 1985 was to be their year. And ours! This pioneering pair of Norwegian – now Scottish – white-tailed eagles hatched and fledged the first wild-bred chick in the UK for some 70 years. That year we all witnessed wildlife conservation history (along with some heartache and near heart failure along the way). 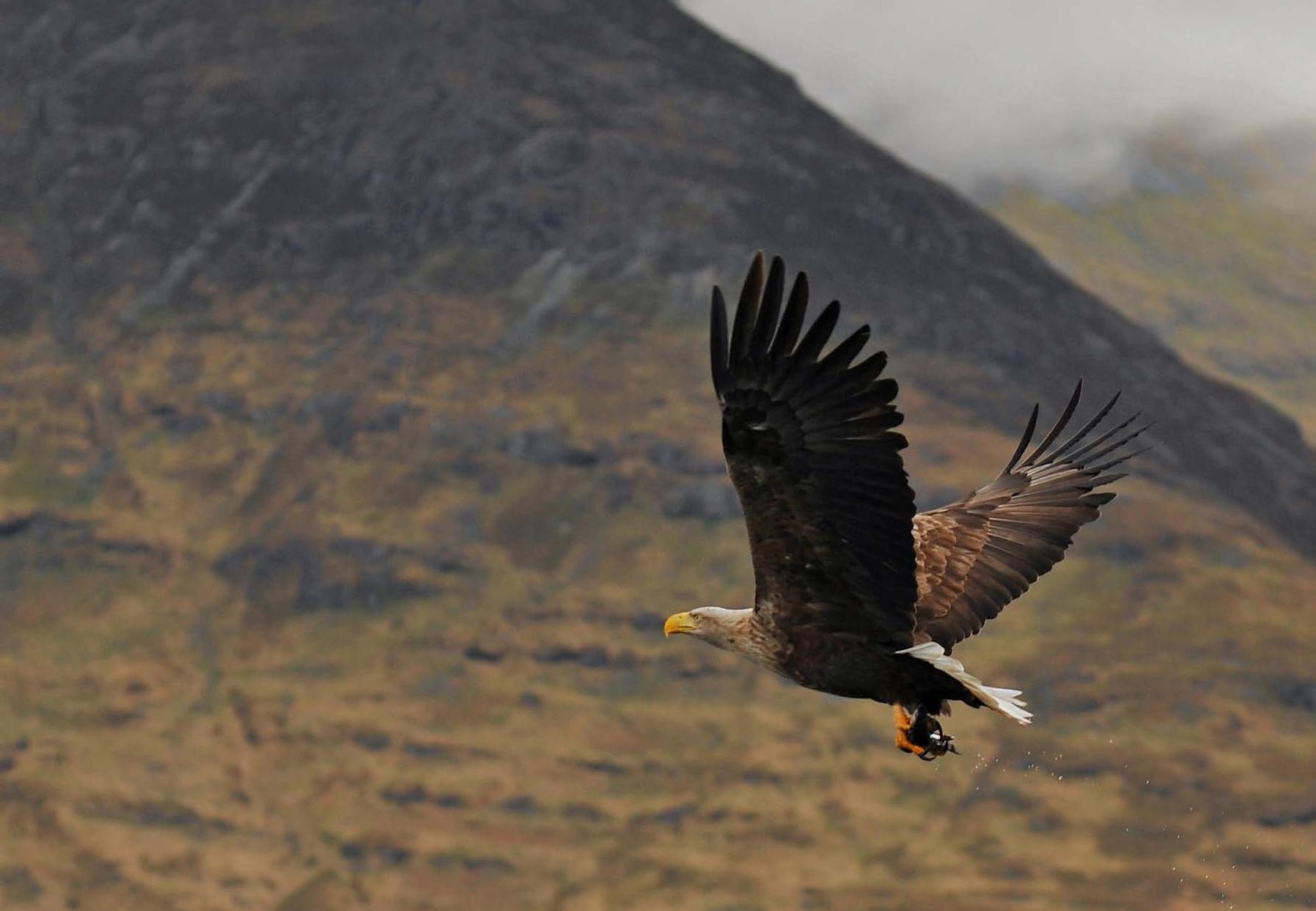 He clasps the crag with crooked hands;
Close to the sun in lonely lands,
Ringed with the azure world, he stands.

The wrinkled sea beneath him crawls;
He watches from his mountain walls,
And like a thunderbolt he falls.

Mainly seabirds like gulls, fulmars and auks – but also geese, crows, ravens and other birds; mammals such as rabbits and hares; fish and carrion such as deer and sheep in the hills, and cetaceans and seals on the shoreline, particularly in winter. They’ll scavenge fish off otters and chase gannets, gulls and herons to get them to cough up their supper.

There are still less than 120 pairs of whitetailed eagles in the UK, all in Scotland, so they remain vulnerable. However, population growth is strong, with a target of over 200 pairs by 2025.

The main threats come from nest-site disturbance such as from egg collecting and irresponsible photography or birdwatching behaviour. Also from direct persecution such as poisoning and shooting to protect livestock and game-rearing interests.

One of the two chicks that hatched died a few weeks so we were down to one surviving chick. The pressure was on. It, too, very nearly didn’t survive long after fledging. Late one gloomy August day, we watched in horror as it ditched in the middle of a choppy grey loch, and as dusk fell, appeared to slip beneath the waves.

Sick with anguish and anxiety, we returned at dawn to retrieve what we knew would be a body. But there, sitting on the shoreline with his proud parents, was our chick; rather soggy but otherwise none the worse for his unexpected baptism in a cold Mull loch. Unable to contain my joy at finding him alive and well, I fell back into the dew-soaked heather with the early sun on my face and wept tears of utter relief.

Unlike the lonely old sea eagle in Shetland in 1918, this very special, lone young eagle would also go on to “gaze out over the horizon and wait”, but he would see many others of his kind soaring over distant mountains, their echoing calls drifting towards him on the sea breeze. Tủsanaich a’ Tilleadh -Iolaire sủil na grèine: the return of the native – the eagle with the sunlit eye was underway.

With thanks to Dave Sexton and the RSPB